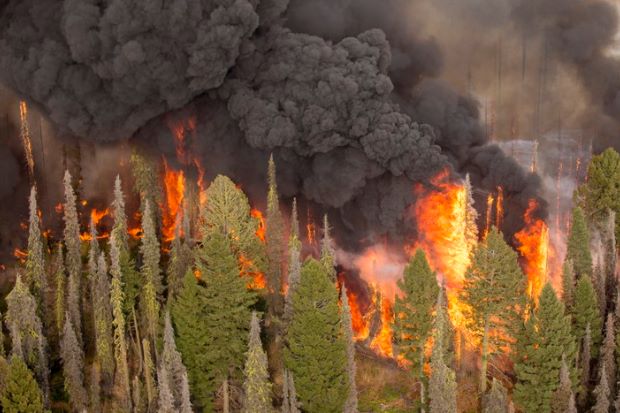 The United States Environmental Protection Agency (EPA) has been working on better regulations for years to ensure that the air quality across the nation promotes the well-being of all Americans. A primary concern in the recent period has been the lowering of particulate matter emissions, with a 2017 study showing that such an initiative would lead to approximately 12,000 lives saved each year, especially when the more vulnerable part of the population is taken into account, such as children, the elderly or individuals that suffer from a condition like asthma.

A study authored by Crystal D. McClure and Daniel A. Jaffe published in the journal Proceedings of the National Academy of Sciences in July 2018 illustrates how the smoke from wildfires is negatively affecting the western side of the United States, obliterating years' worth of improvements of air quality.

The scientist pointed out that larger and more frequent wildfires have been occurring over time, releasing fine particulate matter into the atmosphere without much of an attitude taken to assess the issue from an environmental point of view. Daniel Jaffe, a scientist at the University of Washington and co-author of the study says that the current laws on air pollution are implemented under the Clean Air Act but their major focus is the regulation of particulate matter that is emitted by cars and factories.

The smoke emitted by wildfires releases massive amounts of fine particulate matter, measuring less than 2.5 micrometers in diameter. These small solids or droplets can then be inhaled and cause breathing and pulmonary problems, with the targets being mostly children and the elderly but also the communities that are located in the vicinity of the wildfires in general. The areas near the wildfires can have such an increased level of air pollutants that authorities might advise people to stay indoors for their own safety, as standing outside for a longer period of time could lead to serious health issues.

In the study, Jaffe states that it is challenging to track the precise effects that the wildfires have on the pollution of air due to the fires usually being sporadic and irregular. He says the measurements are quite peculiar since it is very common for the wildfires to gravely impact one community while others that are relatively close remain mainly unaffected.

The way that Jaffe began his investigation on the influence of wildfires on air pollution was by having a pollution monitor set up outside the city of Eugene in Oregon on a mountainside with the purpose of recording emissions from China that were entering the U.S. The analysis took a different direction, however, when Jaffe observed new data offered by the monitor that showed the ways in which particulate matter from wildfires was affecting the atmosphere.

McClure and Jaffe analyzed the daily measurements of particulate matter obtained between the years of 1988 and 2016 from over 100 rural locations across the nation, motivating the choice by wanting to eliminate the role of industrial emissions in releasing air pollutants. They discovered that in the majority of the sites there are notable increases in the levels of clean air with the exception of the northwest region, which is a part of the country that during the summer usually is perturbed by wildfires.

Operating on the premise that fine particulate matter is the result of fire emissions while sulfate is released by burning fossil fuels, the scientists were able to come to the conclusion that it was the wildfires that were the culprit of the high levels of air pollution in these areas. Rural parts of California, Idaho, Montana, Nevada, Utah and Wyoming, all provided data sets that recorded increased levels of PM 2.5 but no raised levels of sulfur oxides emissions.

Both scientists agree that while climate change and rising temperatures definitely play an important role in the occurrence of more frequent and larger wildfires, it is not entirely to blame, other factors contributing to the issue as well, one of which would be, in their opinion, the poor management of U.S. forests with fire-prone underbrush left unattended. The major challenge moving forward is to look into efficient and affordable ways to gain some kind of control over this source of air pollution that is not as easy to regulate as those that depend on humans.