home \ Water \ What Are PFOA and PFOs and How Dangerous Are They? 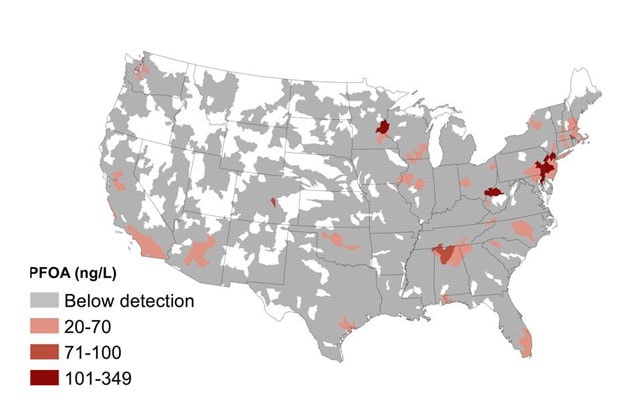 Perfluorooctanoic acid (PFOA), also known as C8, and perfluorooctanesulphonate (PFOs) have been making the headlines in the past years as the health risks associated with these chemicals start to gain more attention. These compounds belong to the wider class of perfluoroalkyl compounds which, not long ago, were thought to be innocuous. However, recent studies point out that they might pose health and environmental hazards.

In the past decades, PFOA and PFOs had been very popular compounds among manufacturers and industrial facilities. This is an alarming example of how lack of experimentation can go hand in hand with a prolific use that harms both the individual and the environment.

Consequently, nowadays these chemicals are present virtually everywhere in the environment and in the species that inhabit it, humans included. PFOs and PFOA break down extremely slowly in the environment so the contamination risks are prolonged over a long period.

They haven't been classified as contaminants for a long time because they have a peculiar behavior which makes them difficult to spot. Most contaminants that harm living species are accumulated in the fatty tissue, but these chemicals bind to proteins. According to the EPA, PFOs and PFOA are easily accumulated in living species in high quantities and their estimated half-life is 4 years in humans.

To shed more light on this topic, it's essential to understand what exactly these compounds are and where they can be present. Subsequently, we will elaborate the associated risks and see if and how they can be avoided.

What Are PFOA and PFOs?

PFO is perfluorooctane sulfonate and PFOA is perfluorooctanoic acid and both are part of a class of compounds called perfluoroalkyl substances (PFAS). These synthetic compounds provide a series of benefits for industrial usage, most importantly, they are resistant to water and lipids. Due to their capacity to deter water and grease, they have been used in a wide range of products.

Where Are They Used?

These compounds have been deployed for decades, but it's only recently that the health and environmental effects correlated to their usage has been exposed. PFO's and PFOA have been used since the 50's for their water-resistant and non-stick capacity. They can be found in different products and industrial applications. Here are some examples of common goods that can be manufactured using PFOs or PFOAs.

The good news is that due to the increasing health and environmental concerns, nowadays these chemicals' deployment is being phased out.

What Health Risks Are Associated to These Compounds?

Firstly, it's important to mention that the studies related to the health effects of PFOA/PFOs exposure are relatively recent. Most of the data that points out to their adverse effects come from experiments conducted on animals. More research is needed to confirm the link between these synthetic compounds and the associated health risks.

Some of the potential effects on human health are:

There is a reason to believe that exposure to high levels of PFOs and PFOA may also lead to impaired fetal development, skeletal issues, cardiovascular problems, testicular cancer, kidney cancer, thyroid cancer.

For now, the International Agency for Research on Cancer has classified PFOA as possibly carcinogenic.

How Are People Exposed to PFOs and PFOA?

People can be exposed to these compounds if they drink contaminated water or they eat contaminated food. These contaminants can get in the food as a result of the packaging containing them or because the crops which are used to produce the foods were contaminated by the PFOs and PFOA found in the soil. Consumer products containing PFOA or PFOs are also a source of exposure.

Those who work in an industrial facility where PFOs or PFOA are deployed, have higher contamination risks because the level of toxicity they may be exposed to is elevated.

What Environmental Risks Have Been Discovered?

PFOA/PFOs can also contaminate the environment due to the disposal in landfills of product that contain them.

Because these compounds are present in the soil, they also contaminate the water which leads to greater health risk for the general public. The compounds migrate from the soil into the ground and surface water and from there to the public and private water supplies. Even if measures are taken to eliminate the exposure in drinking water, contamination will still continue due to these chemicals' great resistance and the fact that they are perpetually formed due to precursors.

How Can We Minimize the Risks?

One of the most common sources of exposure to PFOA is water. If the water your area contains PFOA/PFOs levels that exceed the normal level, you can switch to bottled water or start using water filters as a prevention method.

To provide a margin of protection, the EPA has established a set of health advisories for these chemical compounds. According to this advisory, the level of PFOA and PFOs in drinking water should not exceed 70 parts per trillion.

Additional safety precautions the general public can take are:

It's yet impossible to predict the long-term effect of PFOA and PFOs on the environment, as for the health effects, more studies are necessary to confirm the current findings. Before any new conclusions emerge, we can try to prevent the risk of exposure to PFOA and PFOs by paying more attention to the products we buy. Moreover, it's useful to be informed of the new updates regarding the water quality in our area.