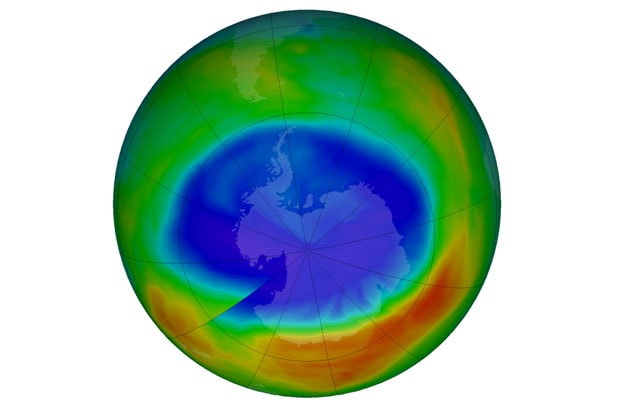 For the first time in many years, scientists have been able to report a depletion of the ozone layer hole. The cause is believed to be the international ban that helped reduce the levels of ozone-destroying chlorine. The chemicals contained in chlorine are chlorofluorocarbons (CFCs) and they are the result of human activity. These are very resistant compounds that finally end up in the atmosphere where the ultraviolet rays break them apart leading to the formation of chlorine. In its turn, chlorine is responsible for the destruction of the ozone molecules.

Why is this finding important?

The answer is human health; the stratospheric ozone plays a major role in absorbing the ultraviolet radiation that is so harmful to human life. This type of radiation is a known factor that contributes to the development of skin cancer. Moreover, it has a negative impact on our immunity and it is also harmful to plant species.

As NASA scientists reported, there is a clear reduction in the depletion of the ozone layer due to the lower levels of chlorine. More precisely, specialists have concluded that a 20% reduction of the ozone depletion was registered between 2005 and 2016. During the same period, the CFCs decrease by approximately 0.8% each year.

The studies that led to this conclusion were carried out aboard of the Aura satellite that monitored the ozone hole which forms regularly above Antarctica during the southern winter (July - September). The data were analyzed during 2005 - 2016 using the Microwave Limb Sounder (MLS) which was able to detect and measure the hydrochloric acid level. This gas is formed when the ozone is destroyed by chlorine which then reacts with methane and produces it. The measurements made by MLS regarding the levels of hydrochloric acid helped scientists conclude that there is a significant reduction of chlorine.

The cause of this achievement is the international ban that limits the use of chemicals which lead to the formation of chlorine.

There are positive predictions for the next years as scientists say that a continuous reduction of the Antarctic ozone hole is expected. Simultaneously, the levels of CFC's in the atmosphere will gradually decrease. Nonetheless, it will take several decades before the hole will completely disappear given that CFCs have a very long life that can reach 100 years.

Most probably, we will continue measuring the ozone hole for at least 40 more years. Even by the time it will be officially considered gone, we will still be able to see a small reminiscence of what we're facing nowadays.

The international treaty that regulates the substances which contribute to the depletion of the ozone layer is the Montreal Protocol. To this day, the treaty has been signed by 197 countries and it represents the biggest and most effective endeavor in the fight against pollutants that damage the ozone layer.