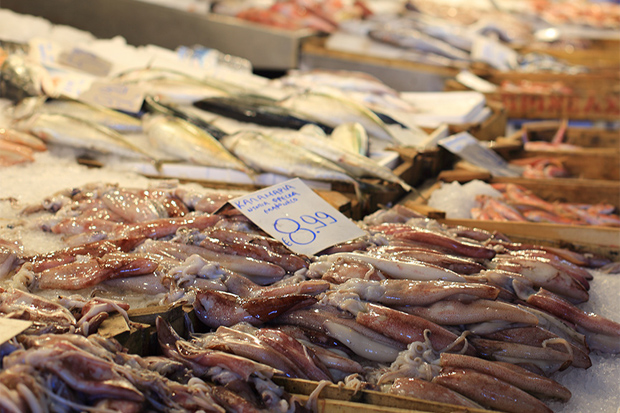 According to a recent study of pollutants in the tissue of almost 1000 whales, marine pollution may be extensive even in the remote regions of our Earth. More importantly, the study confirmed that various pollutants produced on land end up in oceans/seas and seem to accumulate in living organisms.

Moreover, the pollutants are transmitted along the food chain and from a generation to another. Thus, the surprising detection of high concentrations of some toxic contaminants (including metals like mercury, chromium, and aluminum) in the tissue of the studied whales lead to only one conclusion - the contamination of whale body comes from the ocean water and other sea animals on which the whales were feeding! This finding has potentially serious health implications since it raises serious questions as to the quality of the seafood in general - which is a major source of food for us humans, too!

Marine Pollution as Reflected in Whale Tissue Threatens the Quality of Seafood Posing Danger for Humans!

Marine pollution may come from many sources as the oceans and seas act as sinks for many land-produced pollutants. Some common examples of marine pollution sources include (but are not limited to):

Although the sources and potential for marine pollution are well understood, it is still unclear the extent in which extremely large water bodies such as oceans and seas may be currently contaminated. In most cases, the general belief is that pollutants are usually close to their sources and their concentration drops substantially dissipating away from the source. Recent findings contradict such belief, pointing out the danger that can come not only from the contaminated ocean waters, but especially from polluted seafood as a direct result of contamination.

In this context, the recent study conducted by the biologist Roger Payne, founder and president of Ocean Alliance, is raising major questions and has pointed out the fact that probable ocean water is extensively contaminated with human-made pollutants, even in remote regions such as Arctic regions. The study aimed to investigate persistent and bioaccumulative toxic pollutants including metals in the tissue of a certain whale species called sperm whale. Of note is that such whale species is on the very top of aquatic food chain as it consumes a series of large fish including sharks and swordfish.

The study collected samples from 955 whales in various areas of the ocean and found surprisingly high concentrations (some of which were previously shown to kill cell grown in the lab) of certain metals including: chromium (Cr), mercury (Hg), aluminum (Al), lead (Pb), cadmium (Cd), silver (Ag) and titanium (Ti). As much as 16 parts per million (ppm) Hg was found in whales, while a concentration of Hg of only 1 ppm recorded before in sharks and swordfish was considered quite high, which is why pregnant women and children were advised to avoid these types of fish.

While it is unclear how the high pollutant concentrations may actually be affecting the health of the studied whales, the implications of the study (published in the Scientific Journal Chemosphere) are both concerning the environment and human health and include a series of conclusions such as:

Further research is needed to confirm the findings and check other fish species. Yet, the current study clearly pointed out the real danger for whales and humans and the possibility that much of our seafood is or may become polluted and dangerous for our health.

Of note is that this study was conducted before the major BP oil spill in Gulf of Mexico happened. This oil spill does not add important concentrations of metals in water but may add other persistant pollutants such as PAH (polyaromatic hydrocarbons) that can accumulate in fish and seafood endangering people's health.

Read more about the Gulf of Mexico oil spill here.