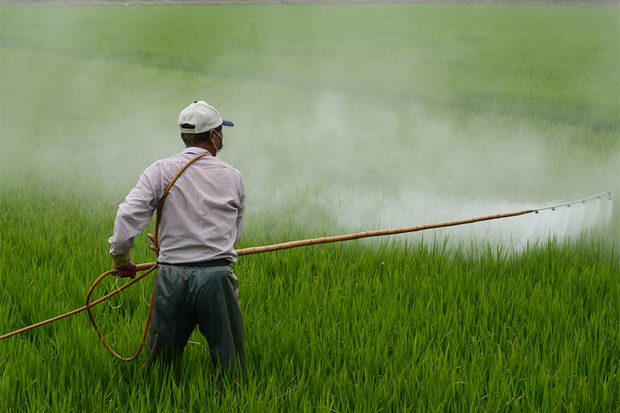 Sulfur-based pesticides and nitrogen-based fertilizers are used extensively in farming and other agricultural practices across the U.S. California is the absolute leader in heavy pesticide use, while other coastal states are more likely to be affected by artificial fertilizer runoffs that are deposited into the water stream and pollute coastal waters.

In 2013, over 21 million kilograms of elemental sulfur were used in California alone. Living near the agricultural fields treated with sulfur-based pesticides may pose serious health risks.

A new study of the Berkley University of California finds that elemental sulfur, one of the most heavily used pesticides to control fungus and pests, is significantly associated to the development of asthma-related symptoms and reduced lung functions in children living in close proximity to the farms where pesticides are used.

The sulfur used within one kilometer from a child's residence has been linked to a decrease in the maximal amount of forced exhaled air per second in a average seven-year old child, and an increase of 3.5-fold odds in asthma and 2-fold odds in symptoms like wheezing and shortness of breath.

Nitrogen-based fertilizers came into agricultural use right after the end of World War II and became increasingly popular throughout the last part of the 20th century. Farmers usually apply more than the recommended amount to protect crops from pests. The excessive amount of fertilizers in the soil is transferred into the water stream of rivers and lakes, and eventually reaches the ocean, causing environmental damage. A research of Louisiana State University shows that over 10,000 square miles in the Gulf of Mexico are already being affected by pollution-caused dead zones.

New research suggests that climate change will increase the polluting effects of nitrogen fertilizers, leading to destruction of more algae blooms in coastal waters and a decrease in the quality of the Northeast, Upper Mississippi and the Great Lakes water basins. Heavier rains, flooding, and drought caused by warmer temperatures will expand agricultural runoffs by as much as 20% by 2100.