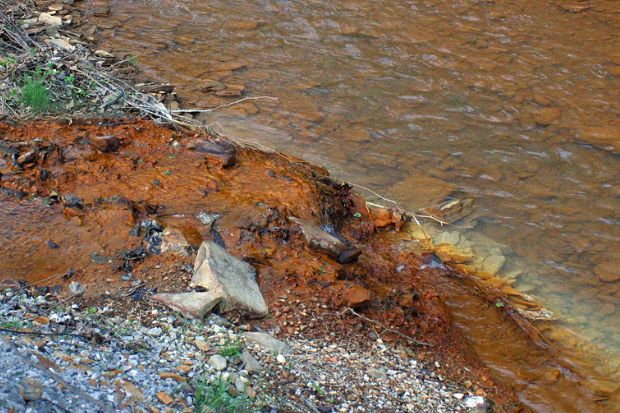 Coal mining is a practice that negatively impacts all kinds of waterways from rivers, streams, lakes and drinking water supplies. The tendency among the large public is to associate coal with having damaging effects on air rather than on water, yet during all the stages of processing it, the rock affects water bodies in the proximity of the place in which it is being exploited. From the very first stage, i.e. mining, coal has the potential to create long-lasting harmful repercussions.

Coal is a rock rich in carbon of black or brownish-black color that has been formed underground after a period of thousands of years of being exposed to both heat and pressure. When burned, the rock releases energy, and in the United States, approximately 30% of all the energy that is produced originates from coal. On the U.S. territory, the largest amount of coal is obtained from mines in Montana and Wyoming and also from the underground mines located in Appalachia. The rest of the energy is provided by natural gas and nuclear sources but by wind and sun as well, accounting for a more environmentally-friendly approach.

The main problem of the coal mining process is the pollution of the nearby waterways by that which is brought to the surface from a coal mine alongside with the extraction of coal. Generally, along with coal comes acidic water carrying arsenic, copper and lead, an occurrence also known as acid mine drainage.

Another method of extracting coal is the mountaintop removal, which has been customarily practiced in the Appalachian area, mainly in the east region. The activity entails the flattening of mountains in the pursuit of new coal seams. For the process to have reached this stage, the implication is that vegetation has been cleared beforehand which only leaves for the setting in place of explosives. As a result, the terrain might lose up to 600 feet in elevation and the debris is usually just disposed of in the surrounding valleys, forming what is referred to as valley fill. According to the Environmental Protection Agency (EPA), these contaminated valley fills have altered the composition of nine out of every ten streams in the areas related to mining operations since 1992.

After coal is burned, coal ash is left behind spreading toxic substances such as arsenic, mercury and lead in the environment. In the United States, coal power plants release over 100 million tons of coal ash each year with only a third of it being recycled in some way, for example, by incorporating it into concrete. The rest of the waste, however, is deposited in mines that are no longer active, in landfills or, as it is mostly the case, in hazardous ponds. In the case of the latter especially, as time progresses, the toxic substances can reach the nearby drinking water. Exposure to coal ash has been openly and for a long time associated with an increased risk of cancer, heart conditions, neurological disorders or reproductive issues.

Avner Vengosh, a coal researcher and geochemist at the Duke University in North Carolina says that in regions in which coal mining is practiced there is a risk of coal ash leaking into shallow wells just underneath the surface, and specifies that this is not a new discovery among scientists and environmental watchdogs. According to EPA records, about 130 million tons of coal ash is being generated each year, placing it second only to domestic garbage in the matter of waterway pollution. Reports have provided evidence of coal ash water spilling into groundwater in places such as Florida, Iowa, Arkansas, Michigan, Montana and Washington among others.

Vengosh warns that coal ash ponds leaking into drinking water supplies is no longer a matter of a hypothetical scenario since the EPA and other environmental organizations have gathered and presented proof of these occurrences in the hopes of implementing some sort of regulation as no state government is yet required to do this kind of monitoring at the present. The solution, he believes will come from filling this knowledge gap and by analyzing what is the rate at which the polluted waters are flowing toward the wells that are filling the drinking water supplies so that legislators have a complete picture of the path of the toxic leakage.