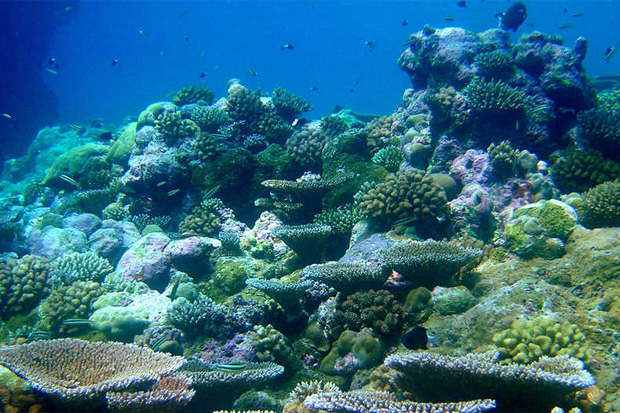 The process by which the water in the oceans turns acidic due to the uptake of carbon dioxide from the air, thereby reducing the pH of the ocean is referred to as Ocean Acidification. Though scientists were tracking down ocean pH for three decades, biological studies began once there was a rapid shift in 2003, and the new term 'ocean acidification' was coined.

Ocean acidification, a direct result of increased carbon dioxide concentration in the air, occurs when seawater absorbs carbon dioxide from the air and reacts to form carbonic acid. This process reduces the ocean's pH, makes the water acidic, and decreases carbonate ions, which are important building blocks for the development of seashells and corals. Ocean acidification occurs along with other climate stressors such as ocean warming and deoxygenation, and therefore, the climatic changes in the marine environment - acidity, heat, and oxygen - often are termed the 'deadly trio'.

Ocean acidification has been occurring very fast over hundreds of years as compared to other similar phenomena in the Earth's history. According to a study conducted in 2012, the oceans are acidifying almost 100 times faster than at any time in the last 200,000 years. This rapid change is imperiling the ability of ocean systems to get adjusted to high carbon dioxide levels. Ocean acidification poses a significant threat to the marine ecosystem, coastal estuaries, and waterways, the food chain as well as the livelihood of people in the coastal region because most economies depend on sea products such as fish and shellfish. Commercially important species such as clams, lobsters, and oysters are at risk as acidic water erodes away the calcium carbonate in their shells and makes these fragile enough in a way similar to osteoporotic bone in human beings. The acidic nature of water may also wipe out a type of sea snail called pteropod, which is the primary source of food for small fish that in turn serve as food for commercial fish such as Salmon and Tuna. Thus, carbon dioxide emissions are harmful to the fisheries, aquaculture farms, coastal recreation, and the overall diversity of the ocean.

In the past 200 years, the pH of ocean water has dropped by about 0.1 unit that is from 8.2 to 8.1 and it has been estimated that by the end of this century, the pH could further drop by 0.2-0.3 units. We are aware of the short-term effects and local impacts on the ocean's flora and fauna that have been caused by acidification of ocean water. Ultimately, the long-term consequences of the acidic ocean water are unknown, but there are potentially high risks. In fact, the problem of ocean acidification continues to grow as carbon dioxide emissions cause changes to our atmosphere and climate. The atmospheric levels of carbon-dioxide need to drop back at least to the 320-350 ppm range in order to avoid further significant damage.