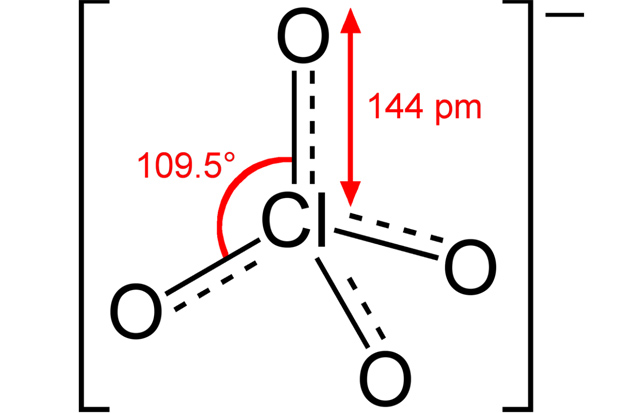 Natural perchlorate was recently found in Antarctic Dry Valleys suggesting that this chemical formation through natural processes may be a ubiquitous phenomenon accounting for a large amount of environmentally reported perchlorate (see publication in Environmental Science & Technology Journal by Kounaves et al - published on February 15, 2010).

The study by Kounaves et al. (mentioned above) pointed out the discovery of perchlorate, one of the listed chemical pollutants, for the first time in soil and ice from several Antarctic Dry Valleys with concentrations up to 1,100 micrograms/kg (or ppb - parts per billion). The found perchlorate (from the driest valleys) correlates with atmospherically deposited nitrate suggesting its formation in atmosphere followed by deposition (a likely source of Chile natural perchlorate). This mechanism likely resulted in perchlorate accumulation in arid areas since little leaching with precipitation water happens in such areas. This study provides the first unambiguous proof of natural ubiquitous formation of perchlorate with accumulation in arid, especially hyperarid climates. The findings have also implications on the biogeochemicals interactions of perchlorate.

Perchlorate (ClO4 -) is a chemical used in rocket fuels, explosives, fireworks, road flares, as well as in many industries. This is due to its particular characteristics including: strong oxidation ability, stability (low reactivity), low volatility, affinity for moisture and high water solubility - to name some of them. Although in use for a long time, perchlorate became an emerging contaminant relatively recent due to our awareness related to both: (1) its potential to interfere with the normal function of thyroid gland (impeding the uptake of necessary iodine) and thus interfering with normal metabolism function in humans, and (2) its widespread detections in the environment (soil and water - both surface and groundwater).