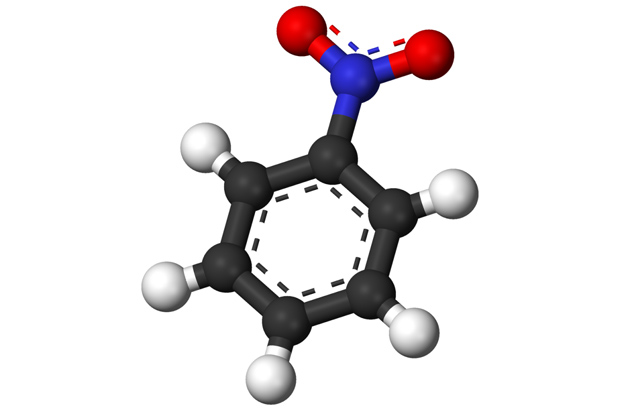 California's EPA (CalEPA) Office of Environmental Health Hazard Assessment (OEHHA) has issued a notice of intent to list nitrobenzene as a chemical known to cause reproductive toxicity (affecting particularly male reproductive system). March 1, 2010 marked the end of the public comment period related to this notice of intent.

Listing nitrobenzene as known to cause reproductive toxicity implies that the following 2 criteria are met:

Background Information on Nitrobenzene and Its Toxicity

Nitrobenzene is a chemical (organic compound) used in chemical synthesis as a precursor to aniline (approx. 95% of nitrobenzene use). It is also occasionally used as a solvent and as flavor in perfume (it is oily and has an almond-like odor). It also occurs in shoe and metal polishes and soaps. Some special industrial uses are also known (but accounting for a very small percent of nitrobenzene use).

In high amounts, nitrobenzene is known to be a chemical pollutant. People may get exposed to nitrobenzene mainly through skin absorption (since it readily absorbs through the skin) and through inhalation of its emitted vapors or fumes (since it is a volatile compound). Ingestion is another exposure pathway, although less common.

Until recently, the?toxicity of nitrobenzene t the reproductive system was not pointed out (before this notice of intent). So far, nitrobenzene toxicity is linked to the following various health effects:

In very rare cases prolonged exposure to nitrobenzene may be fatal.